Things I didn't know about clouds


For its Astronomy Picture of the Day for January 5th, 2010, NASA presented this image of a roll cloud over the coast of Uruguay. 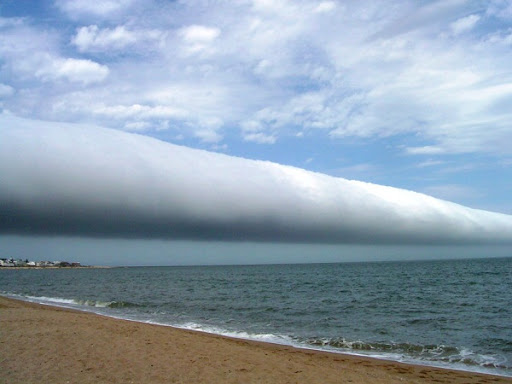 For a larger view, click here for the NASA APOD Web page, then click the image there for the full-size version.

I was fascinated by this picture, having never heard of - much less seen - a 'roll cloud'. A brief Internet search brought me to a Wikipedia article on arcus clouds.

An arcus cloud is a low, horizontal cloud formation associated with the leading edge of thunderstorm outflow, or occasionally with a cold front even in the absence of thunderstorms. Roll clouds and shelf clouds are the two types of arcus clouds, slight variations in their generation and appearance being the difference.

Cool, sinking air from a storm cloud's downdraft spreads out across the surface with the leading edge called a gust front. This outflow undercuts warm air being drawn into the storm's updraft. As the cool air lifts the warm moist air, water condenses creating a cloud which often rolls with the different winds above and below (wind shear).

A roll cloud is a low, horizontal, tube-shaped, and relatively rare type of arcus cloud. They differ from shelf clouds by being completely detached from the thunderstorm base or other cloud features. Roll clouds usually appear to be "rolling" about a horizontal axis. They can be a sign of possible microburst activity.

A shelf cloud is a low, horizontal wedge-shaped arcus cloud. Unlike a roll cloud, a shelf cloud is attached to the base of the parent cloud (usually a thunderstorm). Rising cloud motion often can be seen in the leading (outer) part of the shelf cloud, while the underside often appears turbulent and wind-torn.

There's more at the link, including a rather spectacular picture of a shelf cloud.

So, I learned about two types of clouds I'd never heard of before. I thought some of my readers might be interested, too.

In Australia, they are called Morning Glory and are unique to the Gulf of Carpentaria:
http://www.aerialvideo.com.au/morningglory.html

A good picture. I saw one of these years ago, when a strong artic front passed through. The atmosphere was clear and cold from a previous front, but the artic air mass was substantially colder.

The cloud appeared on the horizon and passed through within a half hour. It literally rolled by overhead. There was no rain, and anyone that had been indoors at the time would have missed the spectacle.