A lot of money for a stolen car!


I was interested to read that the car used by John Dillinger in his escape from the Little Bohemia Lodge in Illinois during April 1934 was sold at auction. CNN reports:

A 1930 Ford Model A used by bank robber John Dillinger to evade federal agents sold at auction Saturday for $165,000.

This car was used in Dillinger's 1934 escape from the Little Bohemia Lodge in Manitowish Waters, Wis. Dillinger and his gang had been staying at the lakeside resort when the proprietor tipped off the FBI.

A team of agents attempted to surround the house, but Dillinger and his partners Homer Van Meter and John "Red" Hamilton escaped to a nearby house where they found the Model A and forced its owner to drive them to safety. 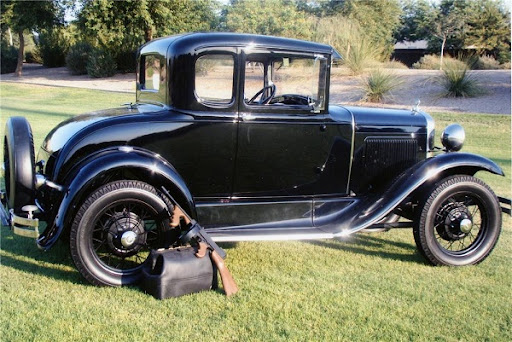 Later, the car caught the attention of police and Hamilton was fatally wounded in a gun fight. The car still bears a bullet hole and the stains of Hamilton's blood.

Dillinger later ditched the car in Chicago, stealing a 1934 Ford V8 in its place. (Dillinger was known to prefer Ford's then-new V8 cars for their speed.)

The car was eventually returned to its original owner, who left it parked in his garage, figuring it wasn't worth repairing. A subsequent owner, who purchased the car 30 years later for $1,400, also left it untouched.

In general, Model A Fords are not particularly rare or valuable, even today. The ordinary market value of a 1930 Model A coupe with a rumble seat is about $13,000, according to appraisal Web site Nadaguides.com.

There's more at the link. The Barrett-Jackson Auctions Web page for the car provides more details and photographs.

I suppose to an aficionado of gangland history, this car might be worth that amount of money . . . but having served as a prison chaplain, both part-time and full-time, for over a decade, I'm afraid it leaves me cold. I don't glorify or romanticize criminals like Dillinger - I've met too many of them. He was just another thug who got what he deserved.