Be sure to crack open a cold one on Jan. 24, the day canned beer celebrates its 75th birthday.

New Jersey's Gottfried Krueger Brewing Company churned out the world's first beer can in 1935, stocking select shelves in Richmond, Va., as a market test. The experiment took off and American drinkers haven't looked back since, nowadays choosing cans over bottles for the majority of the 22 gallons of beer they each drink per year, according to the U.S. Census Bureau.

Beer-making got a major boost during the Industrial Revolution, when steam power and artificial cooling made beers quicker to produce and easier to store. Breweries subsequently became a big business across Europe and the United States — stymied there only temporarily during the Prohibition years of 1919 to 1933.

Ironically, it was the Prohibition that ultimately shaped the American population's taste for beer. The stronger beer that was the norm before Prohibition gave way to much weaker varieties afterwards, as people had become accustomed to bootlegged brews, which were always watered down for maximum profit.

There's more at the link, including an interesting history of beer through the ages. The Beer Can Museum also has a commemorative entry for the anniversary on its Web site, with pictures of older beer cans, one of which is shown below. 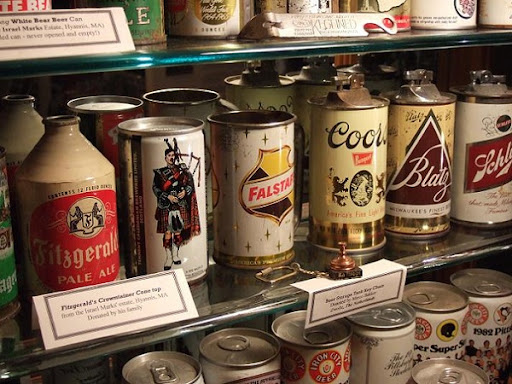 I was particularly struck by the last sentence in the excerpt from the Fox News article above. I'd never understood why US beer is so much weaker and less flavorful than beer in Europe or South Africa. The influence of Prohibition does explain it somewhat, although I can't imagine why it's stayed that way now that imported beers and microbreweries have reintroduced US drinkers to the 'real thing'. Suffice it to say that I'll stick to the stronger, more tasty stuff when I imbibe!

Beer is proof that God loves us and wants us to prosper. -- Ben Franklin

The use of rice as one of the ingredients is also a cost-saving (vs. barley) part of the flavour difference.

And it falls on Tam's birthday!

It's sad, really. A number of the Founders were brewers, and Washington's preference especially for strong Porters is on record. How far we have fallen.

I love Warsteiner Dunkel but it's $40 a case here. For the serious beer drinker that makes it a special occasion beer. You can buy an 18 pack of Bud Light Bottles at Wally World for $12.97! It's not nearly as tasty but it still does the job.

It wasn't prohibition by itself. It was Prohibition, the Great Depression, and WWII back to back. Each enforced its own cutbacks on the ingredients that make good beer, well, good.