It's amazing what one can learn from history . . . 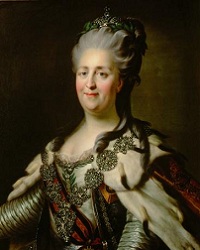 I was simultaneously repulsed and (reluctantly) interested to read of the alleged sexual shenanigans of Catherine the Great of Russia.

It's alleged that during her many projects in the Catherine Palace (home of the famous Amber Room, among other architectural masterpieces) she had constructed a salon, or suite of rooms, or something similar, where she would entertain her (allegedly numerous) lovers. It was said to be filled with erotically-decorated furniture. Apparently it was last seen by German soldiers in 1941, when they occupied the Catherine Palace (which was later destroyed when the Germans retreated).

I might have been tempted to dismiss these stories as yet more accretions to the legends surrounding so famous an historical figure . . . but a German film director, Peter Woditsch, has made a television program about Catherine's alleged hide-away. The evidence he presents appears to confirm that at least some of the stories have some foundation in fact.

It seems that modern politicians and their sex scandals had nothing on their predecessors!

Labels: History, The Mind Boggles
Email ThisBlogThis!Share to TwitterShare to FacebookShare to Pinterest

The story goes that Catherine was fond of young military officers, and a good performance by the young Lieutenant would get him a nice promotion to the point that it was said that there was a Rear Admiral in the rear, and a Front Admiral in the front of every rowboat in the Russian Navy.

Interesting table - almost as interesting as the aptly named swords with hilts similar to the table's legs. Of course, ballocks came in quite a range of sizes.

It would seem Catherine Magnus had much in common with Thodora, wife and consort of Justinian. Or at least Procopius has it so in his Secret Lives.

This certainly puts a statement like "Just put it on the effing table!" in a whole new light.