I was recently introduced to the work of the French prankster Rémi Gaillard. His Wikipedia entry reports: 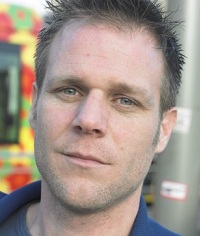 He gained attention in the French media after performing a well-documented series of pranks, including a famous appearance disguised as a Lorient football player in the 2002 Coupe de France final match, during which he took part in the winner's celebrations and was even greeted by the then president of France Jacques Chirac. Gaillard has appeared in several sport events, TV game shows and political rallies, normally breaking the security measures easily.

According to an interview, Gaillard started his pranks after losing his job at a shoe store. He allegedly began to use his free time to "have fun".

Gaillard's motto is "C'est en faisant n'importe quoi qu'on devient n'importe qui" in translation: "It's by doing whatever that you become whoever", by which he explains the reason for his behavior.

The majority of Gaillard's sketches are of the hidden camera type, in which the antagonist performs an unexpected or surprising action to elicit humorous responses from the bewildered witnesses. Gaillard often disguises himself for these sketches. His pranks can also be regarded as an act of exhibitionism, especially when posing as a member of a sports team. During some pranks, Gaillard is accompanied by a crowd of friends, giving the action a flashmob-like nature. Some other videos may feature acrobatics like aiming footballs at distant goal-like objects, or more still aim to antagonize police forces he interacts with during his sketches.

There's more at the link, and (for those who understand French) at M. Gaillard's Facebook page, as well as his 'official' Web site.

As a representative example of M. Gaillard's sense of humor, this video shows what happens when he dresses as Tarzan and invades the monkey house at a zoo, while his friends don animal costumes and flashmob the place. The resulting chaos can only be described as magnificent (except by the zoo security personnel, who probably used rather different - and more pungent - descriptions while trying to get the pranksters out! They certainly look annoyed . . . ).

He OBVIOUSLY has way too much time on his hands... Some of the up close stuff would not fly here either...