OK, this thing is weird!


I'm used to plants and animals, distinct from one another - but what happens when one of them crosses the line?

A green sea slug appears to be part animal, part plant. It's the first critter discovered to produce the plant pigment chlorophyll.

The sneaky slugs seem to have stolen the genes that enable this skill from algae that they've eaten. With their contraband genes, the slugs can carry out photosynthesis — the process plants use to convert sunlight into energy.

"They can make their energy-containing molecules without having to eat anything," said Sidney Pierce, a biologist at the University of South Florida in Tampa.

Pierce has been studying the unique creatures, officially called Elysia chlorotica, for about 20 years. He presented his most recent findings Jan. 7 at the annual meeting of the Society for Integrative and Comparative Biology in Seattle. The finding was first reported by Science News. 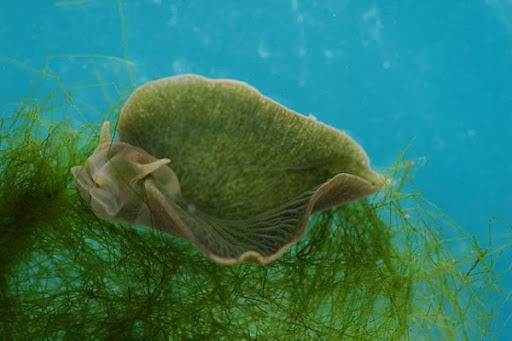 "This is the first time that multicellar animals have been able to produce chlorophyll," Pierce told LiveScience.

The sea slugs live in salt marshes in New England and Canada. In addition to burglarizing the genes needed to make the green pigment chlorophyll, the slugs also steal tiny cell parts called chloroplasts, which they use to conduct photosynthesis. The chloroplasts use the chlorophyl to convert sunlight into energy, just as plants do, eliminating the need to eat food to gain energy.

"We collect them and we keep them in aquaria for months," Pierce said. "As long as we shine a light on them for 12 hours a day, they can survive [without food]."

The researchers used a radioactive tracer to be sure that the slugs are actually producing the chlorophyll themselves, as opposed to just stealing the ready-made pigment from algae. In fact, the slugs incorporate the genetic material so well, they pass it on to further generations of slugs.

The babies of thieving slugs retain the ability to produce their own chlorophyll, though they can't carry out photosynthesis until they've eaten enough algae to steal the necessary chloroplasts, which they can't yet produce on their own.

Don't tell Al Gore that this slug can produce chlorophyll, or he'll have it genetically mutated to absorb carbon dioxide as yet another answer to Globular Worming!

"multicellar"? I must be inferior, I haven't even got one cellar!

More interesting would be to see if it could absorb the information from the algae used to make oil. The slug might be a reasonable host to produce and excrete the oil, rather than use the expensive extraction processes needed today.