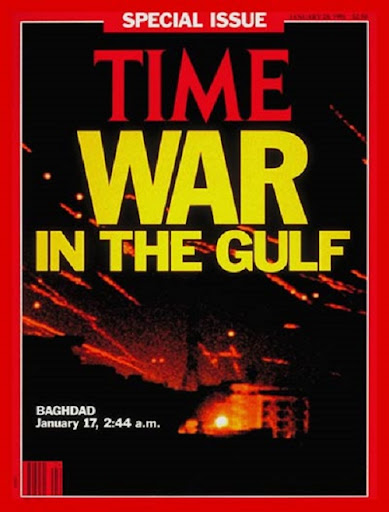 I was up late in South Africa, watching CNN on satellite feed, and I can still remember the thrill of that first strike on Baghdad (which took CNN's correspondents there off the air). In the days that followed, video footage of precision bombs hitting their targets with pin-point accuracy demonstrated that air bombardment had entered a new era. Less than a third of the bombs dropped during Operation Desert Storm were guided; today, it's rare to the point of being really unusual to find 'dumb' bombs being dropped on anything.

Here's a news report from that night, nineteen years ago.

Say what you will about war, this one was justified and necessary. Well done to all who served in it, and thank you.

An interesting story is the deception campaign leading up to the kick-off; Allied aircraft flying patrols to lull the Iraqi air defense operators into a pattern, and then one huge effort the night before to reconfigure an awful lot of aircraft to exploit this weakness.

I was on a plane to MCRD San Diego when it kicked off. Got to watch portions of the land war on CNN from the front leaning rest.