The world's first 'Swiss Army knife' has been revealed - made 1,800 years before its modern counterpart.

An intricately designed Roman implement, which dates back to 200 AD, it is made from silver but has an iron blade.

It features a spoon, fork as well as a retractable spike, spatula and small tooth-pick. 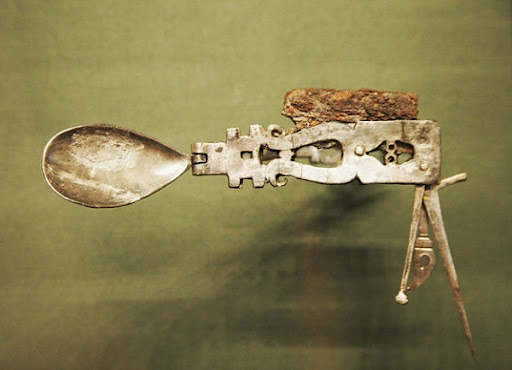 Experts believe the spike may have been used by the Romans to extract meat from snails.

It is thought the spatula would have offered a means of poking cooking sauce out of narrow-necked bottles.

The 3in x 6in (8cm x 15cm) knife was excavated from the Mediterranean area more than 20 years ago and was obtained by the museum in 1991.

The unique item is among dozens of artefacts exhibited in a newly refurbished Greek and Roman antiquities gallery at the Fitzwilliam Museum, in Cambridge.

Experts believe it may have been carried by a wealthy traveller, who will have had the item custom made.

A spokesman said: 'This was probably made between AD 200 and AD 300, when the Roman empire was a great imperial power.

'The expansion of Rome - which, before 500 BC, had just been a small central Italian state - made some individuals, perhaps like our knife-owner, personally very wealthy.

'This could have been directly from the fruits of conquests, or indirectly, from the 'business opportunities' the empire offered.

'We know almost nothing about the person who owned this ingenious knife, but perhaps he was one of those who profited from the vast expansion of Rome - he would have been wealthy to have such a real luxury item.

'Perhaps he was a traveller, who required a practical compound utensil like this on his journeys.'

The spokesman added: 'While many less elaborate folding knives survive in bronze, this one's complexity and the fact that it is made of silver suggest it is a luxury item.

'Perhaps a useful gadget for a wealthy traveller.'

Intrigued, I looked for more information. The Fitzwilliam Museum's Web site has a lot of background information on their Greek and Roman historical exhibits, and their refurbishment. The BBC also has an interesting audio slideshow of the Museum's exhibits, with commentary by the Keeper of Antiquities. Very interesting viewing and listening, if you have time to spare. Recommended.

I hope some body will make a copy of this in stainless steel and silver plate what a great object.

I had something similar in Boy Scouts... mine wasn't nearly as nice... :-)