Have shoes changed how we run?


The BBC has an interesting article asking this question.

The question of how best to support and protect a runner's feet is something that has intrigued both scientists and sports shoe designers.

This analysis, the researchers said, took an evolutionary approach to that question.

Their results showed that "shod" runners tended to strike the ground with their heel first.

"This creates an impact; it's like someone hitting your heel with a hammer with up to three times your body weight," said the lead researcher, Dr Daniel Lieberman from Harvard University in the US.

"Those collision forces have been implicated, by several studies, in certain kinds of repetitive stress injuries.

"Shoes work because they cushion much of that force - slowing it down, mostly."

But experienced barefoot runners appear to have developed a different way to prevent the pain, striking the ground with the forefoot or mid-foot.

He explained that the style adopted by barefoot runners may, in some respects, be less damaging.

Dr Lieberman's footage also demonstrated the specialised anatomy of the human foot, and caused him and his colleagues to propose that modern sports footwear may have altered how people run.

It's interesting to read this study in the light of another, about which I wrote last year, which suggested that expensive running shoes might be a waste of time and money. Labrat of the Atomic Nerds was trying to experiment with a different approach . . . if you're reading this, Labrat, how about an update?

The Vibram Five Fingers range of shoes (the 'Moc' model is illustrated below) are produced with a more nearly 'barefoot' running style in mind. 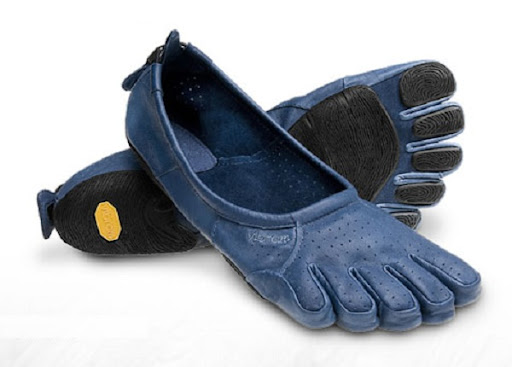 I can't say whether or not they work as advertised, but there seem to be many satisfied users who swear by them (and not at them).

It looks like this area is attracting a great deal of attention. I'll keep an eye open for new developments.

I love me some Vibram Five Fingers, Bayou. Got a pair for Christmas and can now run up to three miles at a stretch in them. Use them for everyday walking around, too. I fell into them after reading "Born To Run." What was said in the book, and by several studying the subject seems to make sense, and has helped me to increase my run times and overall strength and fitness level in my legs. If anything, these are some cool shoes, and I recommend you at least give them a brief try.

Project is currently on hiatus due to snow and ice everywhere and me not wanting my feet to freeze. Ordering the insulated version would help, but not in snow deeper than an inch. They apparently used to make a "snow boot" version, but discontinued them as they were just too awkward a compromise.

I am less comfortable and there are more twinges in my knees and hips than there were. And yes, it instantly altered my running style, and it was indeed much more efficient. Granted my previous shoed running posture was atrocious, but not having anything between your feet and the ground is a pretty fast natural corrective.

I'm intrigued enough to buy a pair, but I'm just off the side of the bell-curve they'd made sizes for.

Took this post as a reminder to write up my own experiences.

Have to admit, they take some getting used to. And gawds, but I wish there was a "cold weather" version!

Other than that, they rock!