Nuclear fusion gets closer to reality

The controlled fusion of atoms - creating conditions like those in our Sun - has long been touted as a possible revolutionary energy source.

However, there have been doubts about the use of powerful lasers for fusion energy because the "plasma" they create could interrupt the fusion.

An article in Science showed the plasma is far less of a problem than expected.

The report is based on the first experiments from the National Ignition Facility (Nif) in the US that used all 192 of its laser beams.

Along the way, the experiments smashed the record for the highest energy from a laser - by a factor of 20.

Construction of the National Ignition Facility began at Lawrence Livermore National Laboratory in 1997, and was formally completed in May 2008. 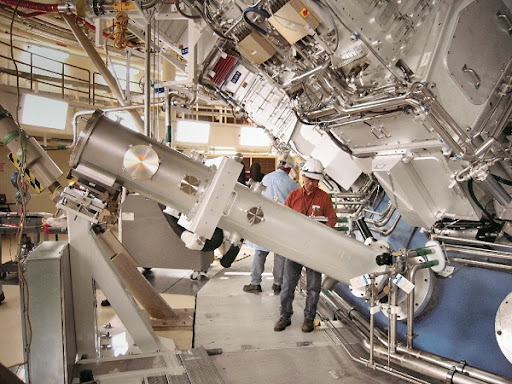 The goal, as its name implies, is to harness the power of the largest laser ever built to start "ignition" - effectively a carefully controlled thermonuclear explosion.

It is markedly different from current nuclear power, which operates through splitting atoms - fission - rather than squashing them together in fusion.

Proving that such a lab-based fusion reaction can release more energy than is required to start it - rising above the so-called breakeven point - could herald a new era in large-scale energy production.

In the approach Nif takes, called inertial confinement fusion, the target is a centimetre-scale cylinder of gold called a hohlraum.

It contains a tiny pellet of fuel made from an isotope of hydrogen called deuterium. 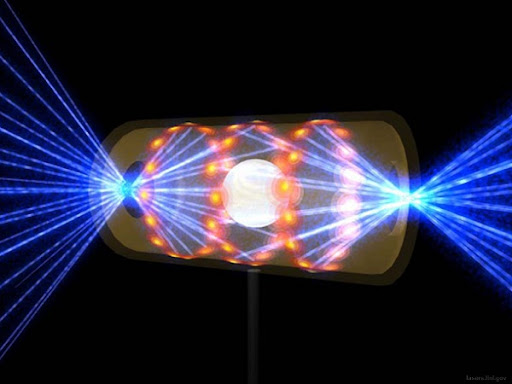 During 30 years of the laser fusion debate, one significant potential hurdle to the process has been the "plasma" that the lasers will create in the hohlraum.

The fear has been that the plasma, a roiling soup of charged particles, would interrupt the target's ability to absorb the lasers' energy and funnel it uniformly into the fuel, compressing it and causing ignition.

Siegfried Glenzer, the Nif plasma scientist, led a team to test that theory, smashing records along the way.

That isn't that much total energy; it's about enough to boil a one-litre kettle twice over.

However, the beams delivered their energy in pulses lasting a little more than 10 billionths of a second.

By way of comparison, if that power could be maintained, it would boil the contents of more than 50 Olympic-sized swimming pools in a second.

Crucially, the recent experiments provided proof that the plasma did not reduce the hohlraum's ability to absorb the incident laser light; it absorbed about 95%.

But more than that, Dr Glenzer's team discovered that the plasma can actually be carefully manipulated to increase the uniformity of the compression.

"For the first time ever in the 50-year journey of laser fusion, these laser-plasma interactions have been shown to be less of a problem than predicted, not more," said Mike Dunne, director of the UK's Central Laser Facility and leader of the European laser fusion effort known as HiPER.

"I can't overstate how dramatic a step that is," he told BBC News. "Many people a year ago were saying the project would be dead by now."

Adding momentum to the ignition quest, Lawrence Livermore National Laboratory announced on Wednesday that, since the Science results were first obtained, the pulse energy record had been smashed again.

They now report an energy of one megaJoule on target - 50% higher than the amount reported in Science.

The current calculations show that about 1.2 megaJoules of energy will be enough for ignition, and currently Nif can run as high as 1.8 megaJoules.

Dr Glenzer is confident that with everything in place, ignition is on the horizon.

He added, quite simply, "It's going to happen this year."

There's more at the link. All pictures courtesy of NIF.

This is really exciting news! If the scientists can, indeed, initiate a controlled (and controllable) nuclear fusion reaction, fast breeder reactors can't be too far away, and the prospect of large quantities of relatively cheap, safe energy is a lot closer. I'll be watching this with great interest.

This is the future, right here.

Idea - let's ask her Majesty's government to take about, oh, 85% of the funds from the Hadley Climate Research Unit (home of the CRUtape Letters) and redirect it towards the fusion program. It would be much better spent.
LittleRed1

Peter,
One minor comment - fast breeder reactors are a type of fission reactor, not related to fusion. "Fast" refers to the use of "fast" neutrons (as opposed to "thermal" neutrons which are responsible for most fissions in contemporary power reactors) and "breeding" refers to the conversion of useless and abundant U-238 into Pu-239. The Pu-239 that is "bred" is a very useful nuclear fuel.

But thanks for the article, this is encouraging and interesting news!
Tom

Fusion power might take on a form most aren't familiar with.