A pair of 'stupid' thrill-seekers face court after allegedly driving along a frozen canal in a car.

The pair narrowly escaped death after their vehicle broke through ice on the Union Canal in West Lothian plunging them into the freezing water. 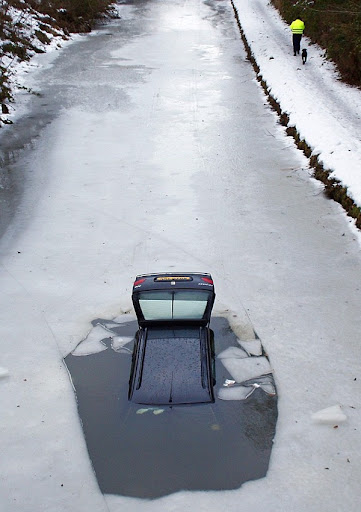 Police branded the hapless driver and his passenger 'stupid' after they were spotted motoring along the frozen canal near Winchburgh on Monday afternoon.

The men are alleged to have driven down a slip road to a popular picnic and dog walking spot by the water, before edging on to the ice.

The black Peugeot got about half a mile down the canal before the fragile ice gave way and the front of the car smashed into the water.

With no other signs of broken ice around the car, the driver and passenger - aged 22 and 24 - are thought to have dragged themselves to the bank before fleeing the scene.

When police arrived after being called by a passerby, they found the car sticking out of the water with the front end submerged.

A map book joined rubbish floating around inside the abandoned Peugeot just yards away from a footbridge across the canal.

Police eventually tracked the two suspects down and charged them with reckless conduct.

I've heard of 'skating on thin ice' - but driving a car on the stuff definitely qualifies for a Doofus award!

note West Lothian is in Scotland, not England...

Why is it that when I note the location, and the age and gender of these folks, I suspect that significant amounts of Scotland's Most Famous Product were likely involved?

45 years ago, we would drive my beetle on the ice.... if it was a foot thick! I suspect my VW weighed quite a bit less than a modern Peugeot. Idiots for sure!

And Darwin is foiled once again. Next time...