The discovery of the first mammoth in Siberia


I came across John McKay's blog through a long series of links while browsing the Web this morning. It looks rather interesting, and I'll be going back to read through his archives. This article caught my imagination: the story of the discovery of the first mammoth in Siberia, 210 years ago. Here's a brief excerpt.

Shumachov (various spellings have been given for his name over the years) was a chief of the Batouline clan of the Evenki. Shumachov's people were better off than other Evenki (called Tungoos or Tungus by most Europeans at the time). The land they called home was productive enough that they lived in permanent cabins in a small village. They owned domesticated reindeer and traded with the Russian merchants who worked the Lena and the Arctic coast. In exchange for the knives and other metal tools the Russians brought, Shumachov's people trapped furs and hunted for ivory. However, looking for ivory was not something dependable that Shumachov and his brothers could dedicate a special time to. It was something they did along side their more important hunting, herding, and fishing.

In the summer of the year that the Russians called 1799, after the fish runs in the Lena had ended, Shumachov took his extended family to the Bykovski Penninsula to hunt wild reindeer. After building the teepee-like huts that served as temporary homes for his band, Shumachov went out to examine the coastal bluffs and see what windfalls the spring storms might have exposed. On the seaward side of a hill called Kembisagashaeta, near the top of the bluff, he noticed a dark mass just beginning to be exposed. He climbed and examined it, but couldn't tell what it was. With more important things to do during the short summer, he didn't spend any more time investigating the mass.

The next summer, when his family returned to the peninsula, Shumachov found a dead walrus on the beach below the mysterious mass. I'm not sure why Adams, the person who recorded Shumachov's story, thought the walrus was important enough to mention. It might be that, in stopping to look at the walrus, Shumachov was reminded of the mysterious mass on the hill and stopped to examine it again. Or the connection might through the subject of ivory. A dead walrus on the beach would be a smelly mess in no time, though a welcome buffet to seagulls, foxes, and polar bears. Shumachov's primary reason for investigating a dead walrus would have been checking to see if the thick skin was salvageable and if it had tusks that he could cut off and sell. Whatever his reason for stopping, Shumachov noted that enough of the mysterious mass had eroded out that he could see that it was made up of one large part and two smaller ones. He would later discover that these were the body and two feet of a mammoth. 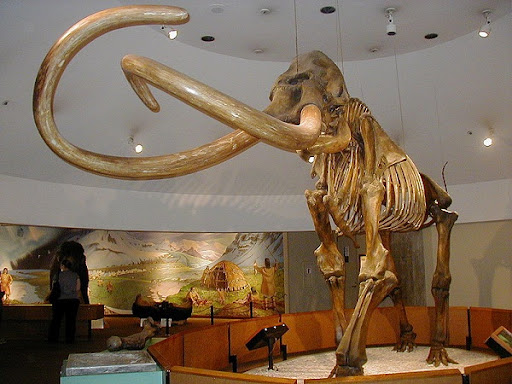 By the third summer, enough of the side of the mammoth had been exposed for Shumachov to see one of the tusks. Returning to the camp, he told the others about his discovery. Shumachov expected the news to be cause for celebration; instead, the older members received it with expressions of sadness. The old men explained to him that several generations before, a hunter had discovered a mammoth carcass near the same spot. He and his whole family died soon after. Because of that, the people of the region viewed mammoth carcasses as portents of disaster. Shumachov became sick with worry and retired to his cabin to die. After a few weeks of not dying, he decided the old stories weren't true and returned to the bluff to hide his discovery.

The next year was colder than usual and the mammoth didn't thaw any further. Adams' account doesn't mention it, but it's possible that Shumachov's efforts at hiding his treasure might have insulated it from whatever warmth there was that year.

Finally, at the end of the fifth summer, 1803, the bluff had eroded and thawed enough for the mammoth to break free and tumble down onto the beach. The following March--still the debt of winter, but a time of little activity, waiting for the spring hunting and fishing season--Shumachov and two companions left their village and returned to the Bykovski Peninsula to collect the ivory treasure. The tusks were nine feet long and two hundred pounds each. That summer, Roman Boltunov, a merchant from Yakutsk sailed down the Lena and, when passing through Shumachov's village, bought the tusks. The price was fifty rubles worth of trade goods--roughly $975 today. For a people who lived almost completely outside of the money economy, this would have been a great boon to his village. When he heard that the ivory came from a complete mammoth, Boltunov was curious enough to go to the spot and make a drawing of how the animal must have looked in life. Shumachov had watched the mammoth slowly reveal itself and waited to collect the ivory for five years. Having done that he had no further use for the carcass; he left it to wild predators and fed some of it to his dogs. There is no evidence that Shumachov's people ate, or even tried to eat, any of the mammoth.

In the one hundred ten years since Evert Ysbrants Ides first reported the discovery of a mammoth carcass, only four more had been reported and none of them had been recovered or made available for European scientists to examine. Dozens more were probably discovered during that time, but never reported. Shumachov's mammoth would have shared the fate of all the others except for one of those fortunate coincidences of history that placed the right man in the right place at the right time.

There's much more at the link. It's very interesting stuff, and well worth reading. Thanks to Mr. McKay for his informative and educational blog.