I'm highly amused to read of the outbreak of a new 'war' between Lebanon and Israel - this time over, of all things, hummus (or 'humous', as the Jerusalem Post article below spells it).

Israel has taken the upper hand in a new kind of Mideast conflict, one in which bullets are replaced by chickpeas.

Using a satellite dish on loan from a nearby broadcast station, chefs in Abu Ghosh on Friday whipped up more than 4,000 kg. of humous, adding a Guinness world record to the Arab town's reputation for hospitality and harmony.

The cooks nearly doubled the previous record for the world's biggest serving of humous, set on October 24 by cooks in Lebanon. That record broke an earlier Israeli record and briefly put Lebanon ahead.

Hundreds of jubilant Israelis, a mix of Arabs and Jews, gathered around the giant dish, many of them dancing as a singer performed an Arabic love song to the beige chickpea paste.

The exact record set by the chefs, overseen by Abu Gosh Restaurant owner Jowdat Ibrahim, was 4,090 kg. The Lebanese record, set in Beirut by chef Ramzi Choueiri, was 2,056 kg.

"[The Lebanese] are like a soccer team," Ibrahim told The Jerusalem Post in front of the six-meter wide satellite dish. "Sometimes you win, sometimes you lose."

Just after midday, an adjudicator sent from London by Guinness World Records, Jack Brockbank, confirmed that the Israeli chefs now held the record.

"I made sure that they used only the traditional ingredients, which are chickpeas, lemon, tahini, garlic, salt and olive oil," Brockbank said. "It was really good humous at the end." 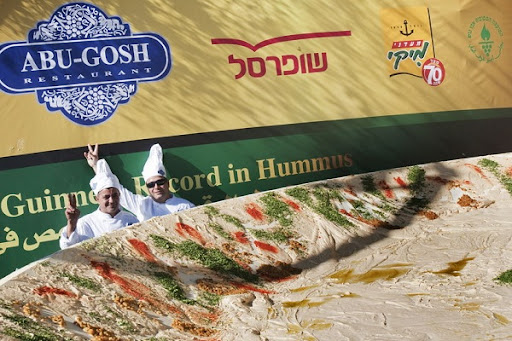 While Lebanese officials have complained that Israel has stolen the food and the name "humous" from Lebanon, Abu Gosh Restaurant manager Ibrahim Hamis claimed otherwise.

"Humous is an international food, and it's a special and healthy food as well," said Hamis. "If only this were the only thing we fought over with Lebanon."

More than 50 Arab and Jewish chefs from restaurants within Abu Gosh put their own competitive spirits aside to make the humous at a nearby factory early on Friday morning, before bringing it to the restaurant.

Baracke CEO Ibrahim Bashir said that 500 million sesame seeds were used to make the tahini in the humous, in addition to the four tons of chickpeas.

Three months ago, when the Lebanese chefs prepared their record-breaking dish, they called it a move to reaffirm ownership of a Lebanese food that had been appropriated by Israelis.

"Lebanon is trying to win a battle against Israel by registering this new Guinness World Record and telling the whole world that humous is a Lebanese product, it's part of our traditions," Fady Jreissati, the Lebanese organizer, said at the time.

In 2008, a group of Lebanese businessmen announced plans to sue Israel to stop it from marketing humous and other regional dishes as Israeli.

Lebanese Tourism Minister Fadi Abboud told The Associated Press on Friday that his country plans to beat the new record in the spring with an even bigger plate of humous, to be prepared on the border with Israel.

"This way they can learn how to do humous," he said.

On Friday, a newscaster on Army Radio referred to the humous clash as "The Third Lebanon War."

It certainly looks as if the occasion was a celebration for all concerned. Here's a video of proceedings.

I like hummus - I like it very much! - but diving into four tons of the stuff? Not for me, thank you!