I'm highly amused at a series of training courses in vintage aircraft maintenance offered by Vintage Wings of Canada. Their promotional material is certainly tongue-in-cheek!

To begin, let's note that the North American T-6 trainer of World War II vintage (shown below), known as the 'Texan' in US service, was named the 'Harvard' in British and Commonwealth service. 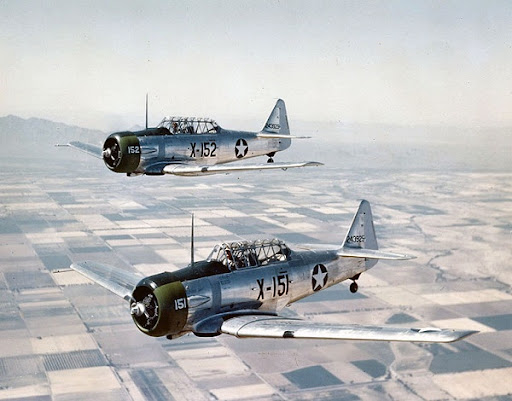 There are two places where you can become a Harvard Graduate. One, we've heard, is somewhere in Massachusetts, the other is right here at the Canada Aviation Museum and the Vintage Wings of Canada facility.

Have you ever wanted to know how the landing gear on a Harvard retracts, locks, or drops? How best to do an aileron roll? Or how to do a crosswind landing in this heavy tail-dragger?

Possibly you have always wanted to know how the wings fold on a Corsair? Or how to start 18 massive cylinders and a 13 foot diameter prop that weighs more than small car? Or how to fly an approach with 20 feet of nose blocking your view to the runway? Or damn it... Just how the heck do you even get in that big beast?

Perhaps you wondered why the Curtiss-Wright P-40 Kittyhawk made such a good ground attack aircraft. And what's it like to fly behind an Allison? Why that crazy landing gear retraction sequence? Want to know first hand how it was to fly with the legendary Stocky Edwards?

Well, you can find the answers to these questions and much, much more in our new series of Warbird Ground Schools. Vintage Wings of Canada has teamed up with the Canada Aviation Museum to bring three information packed two-day ground schools dedicated to the idiosyncrasies and habits of three of the most important aircraft of the Second World War. Get first-hand knowledge from the pilots who fly and manage three of Vintage Wings of Canada's most important aircraft - the North American Harvard, the Goodyear FG-1D Corsair and the P-40N Kittyhawk.

I had to laugh at the comparison between a multi-year degree from 'somewhere in Massachusetts' and a two-day course on maintaining a vintage training aircraft! Someone at Vintage Wings of Canada has a sense of humor.

(Oh - if you're interested in the courses, see the announcement on their Web site for more information.)

This is probably set up in conjunction with the Canadian Warplane Heritage Museum in Hamilton, Ontario. A very worthwhile stop for anyone up that way. They also have one of only two flying Lancaster bombers - the other is in (once)Great Britain. For the nominal sum of around $2K(US) you can get a ride in it.

I've run a Harvard on the ground, that was exceptional.

I have not flown something with an Allison V-12 engine, although I'd like to.